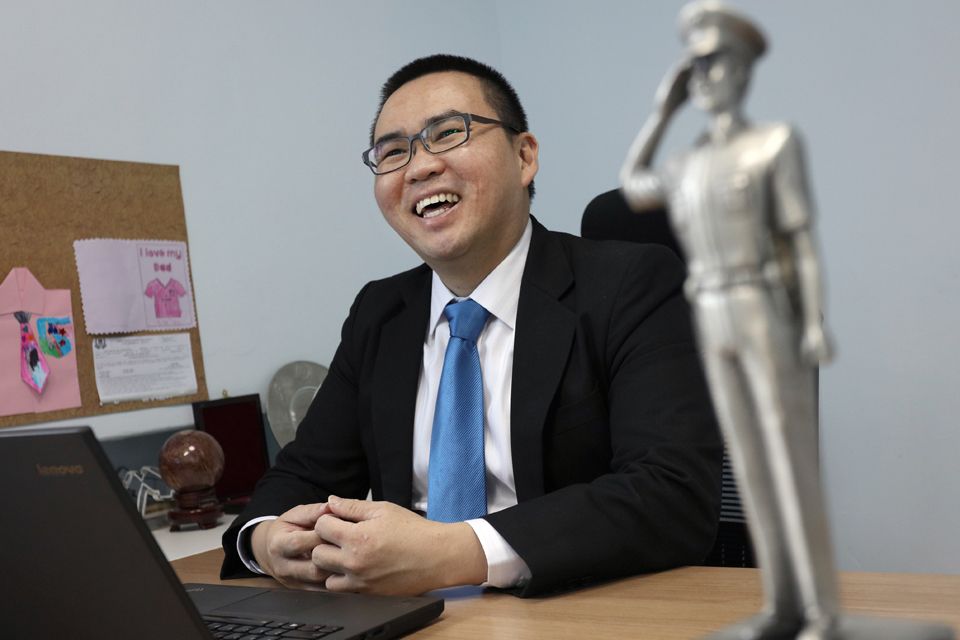 PROFESSIONAL security training company Leacov Singapore has only been operating for a few years. But its rapid growth has already attracted the attention of bigger boys. Subsidiaries of three public-listed companies have expressed interest in acquiring a part or the whole of the firm, says 40-year- old founder Simon Ng. “I have not said yes or no upfront, but am assessing if there is synergy, and where we can be three to five years down the road,” he says. His vision is for Leacov to become an institute for learning and discovering that can eventually offer advanced diplomas and degrees and have branches overseas.

Mr Ng is also specialising within the security training chain, having set up a security consultancy that advises property owners on what measures they can take to enhance their property values. “As a small enterprise, we are nowhere near there. Expanding is about having goals, the right network and the right resources,” he says.

“But that’s my vision, the grand plan – from the day you are born, we can provide enrichment programmes for kids, tuition for school-goers, coaching for young adult workers, continuous upgrading for those who are between their 20s to their 50s and 60s, and well-being training programmes for retirees. It has to be the entire sweep.”

Leacov is an approved training provider providing 23 programmes under the Workforce Skills Qualifications (WSQ) training framework set up by the Workforce Development Agency (WDA). The aim of these courses is to help workers find better jobs, earn higher pay and progress in their lives.

From just a few hundred thousand dollars of revenue in 2013, Leacov’s revenue has grown to a level that allows Mr Ng to make substantial investments to grow his business. “Business has been overwhelming,” he says. “We had started out catering to a customer who wanted their security personnel to be well-trained in security. Then we were given a boost by government regulation to see better-trained security personnel.”

In a bid to boost wages and productivity, the government unveiled a roadmap for the security industry in 2014. Security companies needed to meet training and wage requirements for their staff by September 2016 before their firm licences can be renewed. This led to high demand for training for tens of thousands of security officers in Singapore. Leacov has so far conducted courses for 12,000 security personnel.

A passion for lifelong learning

Mr Ng has spent much of his life in the security industry, and also harbours a passion to keep on learning. A former police officer, he rose to become a bodyguard for a key Singapore official in the 2000s and was also in charge of training new bodyguards. Since 2009, he is the officer-in-charge (NS) of training at the Tanglin Police Division.

But when he joined the police force in 1994, he was an O-level holder and his pay was just S$780 a month. Mr Ng then got a certificate of management studies at SIM University in 1997, progressing to a diploma in 1999 and a degree in 2006. He obtained a Masters of Arts degree in lifelong learning in 2011, along with certifications in coaching and training along the way.

“As I upgraded and gathered more knowledge, I saw how it benefited my personal development. I viewed things and made decisions differently. My career progressed along with my pay. And my life got better – my family was living in a one-room rental flat in 1992, but by 2012 we were living in a jumbo flat,” he says.

However, he was at a low point in 2007. Evaluated every year at his work, the constant feedback was he lacked humility and was too arrogant and self-centred. “At that time I was still single, I wished to have a car, I wanted to be promoted, compared to what I read in the newspapers I wasn’t doing well, and I was wondering why,” he says.

In 2008, he left his job as a bodyguard and joined WDA as a senior manager creating training programmes for the security industry. Amid the global financial crisis, his task was to help the retrenched find jobs. “I saw them gaining knowledge and progressing further. It had a deep impact in me, I wanted to teach or run a training school,” he says. He left WDA in 2010 and became a security consultant. He applied for a licence to start a training school, and also worked at a public listed company to manage training for companies at home and abroad.

Leacov’s licence was then approved and Mr Ng began growing the firm in earnest. At Leacov, his strategy involves bringing the training to workers. Trainers will visit work sites and teach them at conducive hours without affecting operations. “We achieved training requirements with the lowest cost for our customers, as clients don’t need to hire a relief officer – which was hard to find – while their security officers are being trained,” Mr Ng says. Leacov’s training was also more effective when learners learn in an actual work setting, he says.

Looking ahead, Mr Ng plans to make some training classes digital. At least one programme will be launched in Singapore by the end of this year, he says. “At the supervisory and managerial level, some security officers are busy from 8am to 8pm. We can’t train this group. The only time they are free is when they take the MRT to work,” he says.

Leacov is also planning to expand to Vietnam, Malaysia, Myanmar, and the Philippines. He has recruited and trained three salespeople, one for each of the first three countries. Different countries will have different demands, he says. In Myanmar, for example, he plans to sell business and leadership courses to managers.

He is also setting up a security consultancy to help property owners improve their property values. For instance, the closed circuit television (CCTV) recording after the recent terror attack on Bangkok’s Erawan shrine left much to be desired because the footage was too grainy. “Property owners should invest in an appropriate security system to deter, detect and deny criminal or terrorist activities. This investment can ultimately pay off with a higher property value,” Mr Ng says.

Ultimately, doing business requires an attitude of humility and service. Mr Ng tells himself constantly that ego can be his downfall. “So to my customers, staff and students, I adopt a humble attitude and encourage my trainers to do so. At the end of the day, they contribute to our rice bowl. So if we can put our ego aside, we can bring the business to a higher level. And every one of my staff and trainers must remember this.”